Netflix is adopting a “surprise drop” strategy for its documentary and reality programming to compete with the raft of rivals launching into the SVOD space, research revealed today has shown. 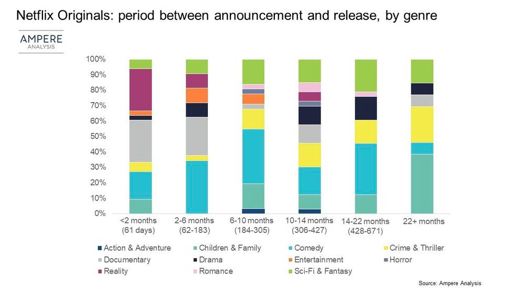 Just under 40% of documentaries and 64% of the streamer’s reality series were released less than two months after they were first announced, according to research group Ampere Analysis.

One in five Netflix original TV shows are released within two months of their initial announcement, Ampere said, but that figure extended to 13 months for drama and comedy commissions.

However while 36% of unscripted Netflix originals were released less than two months after announcement, just 7% of scripted titles had such quick release periods.

Fred Black, Ampere analyst, said the streamer was using the tactic to compete in the increasingly packed SVoD space, which is already home to services such as Amazon Prime but is also set to include offerings from Apple TV, Disney, WarnerMedia and NBCUniversal over the coming months.

“With competition heating up in the SVoD arena, Netflix is using its surprise drop strategy to foil competitors and delay them from copy-catting new content formats,” he said.

“But this is not a simple approach, there are huge variations in the time content takes from announcement to release, based on genre, whether it’s scripted or not and if it’s a sole or co-production.”

Children and family shows have the longest production period, whether created by Netflix and a single producer or as a co-production, while crime and thriller series, as well as sci-fi and fantasy productions, take around a year from initial release to programme launch. Ampere said its research highlighted that 25% of crime content is released between 13-15 months after announcement.

“The shortest co-production was announced 109 days before release – by this point, 39 solo Netflix productions had already been released.” Black added that Netflix’s drama, documentary, sci-fi and fantasy are the most co-produced genres. However there are notable exceptions, the analyst added, such as Netflix natural history show Our Planet, which was two years in production.