Internet advertising will account for 52% of global advertising expenditure in 2021, exceeding the 50% mark for the first time, according to Zenith’s Advertising Expenditure Forecasts. 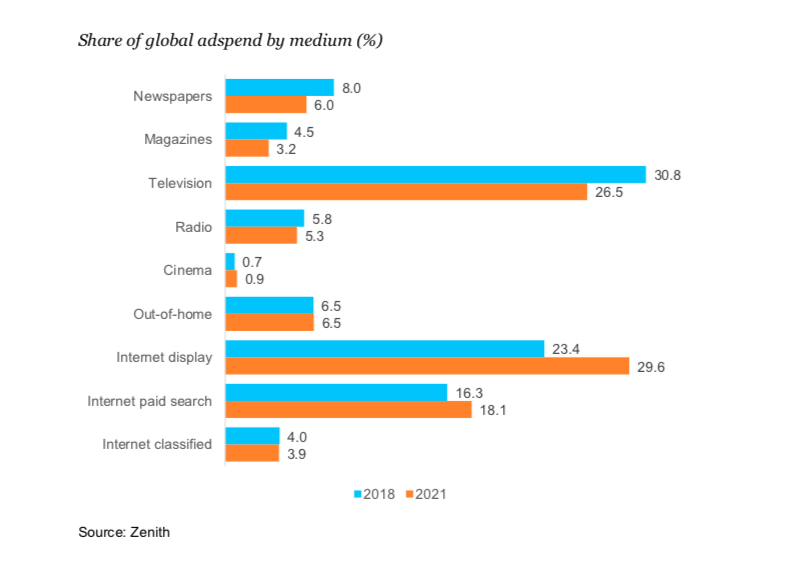 The figure is up from 47% of global ad-spend that internet advertising will account for this year, and up from 44% in 2018.

Internet adspend growth is led by online video and social media, which are expected to grow at average rates of 18% and 17% a year, respectively, to 2021.

Broadcast television is now beginning to shrink, though not on the same scale as other traditional media such as print.  Zenith forecasts traditional television ad revenues to shrink every year from now to 2021, falling from US$184 billion in 2018 to US$180 billion in 2021, when it will have a share of just 26.5% of the total.

According to Zenith, much of the growth in internet ad spend is coming from small, local businesses that spend all their budgets on platforms like Google and Facebook. Big brands are investing large sums in internet advertising, but the majority are still spending most of their budget in traditional media.

Global ad spend growth will trail behind growth in the global economy as a whole this year, after outpacing it last year, according to data from Zenith.

Zenith predicts global ad expenditure will grow 4.6% in 2019, reaching US$639bn by the end of the year. This is slightly below the 4.7% growth rate the group forecast in March.

The agency expects advertising expenditure to grow behind the global economy as a whole in 2019- 2021, after it outpaced it in 2018.

The outfit sees strong growth in North America, oosted by the flood of new small and medium-sized companies using Facebook and Google to advertise for the first time. It estimates that ad spend grew by 8% in both 2017 and 2018, and forecasts 5% annual growth to 2021.

According to Zenith, Western and central Europe has seen solid growth since 2014, at 3% to 5% a year. Overall its  expects the region to continue to grow at the low end of this range out to 2021, despite a 0.4% decline in Germany this year as business confidence declines. Despite Brexit uncertainty, it expects 3.9% growth in the UK, though this is down 0.6% from a previous estimate.

Growth in emerging Asia is slowing as China’s market matures, and is expected to achieve 4.7% average annual growth to 2021, excluding Japan, which will grow at 1.7% a year. Eastern Europe and Central Asia together will grow at 7% a year to 2021 after recovering from a decline earlier this decade.

Advanced APAC countries – Australia, New Zealand, Hong Kong, Singapore and South Korea – are likely to grow at 4% to 2021, according to Zenith.

Television’s share of global ad spend will decline to 26.5% by 2021, according to Zenith.