Global pay TV still set for growth, despite US cord-cutting

Globally, pay TV service providers will add 81 million additional subscribers between 2018 and 2024, translating to growth of 8%, according to Digital TV Research. 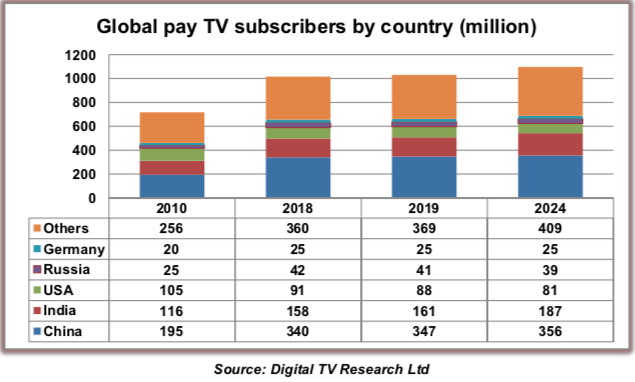 According to the research outfit, this will take the global total to 1.1 billion. Based on forecasts for 138 countries, the number of pay TV subs passed one billion last year.

The research outfit predicts that IPTV will be the leading pay TV platform, adding 100 million subscribers between 2018 and 2024 to take its total to 357 million. IPTV overtook pay satellite TV subs in 2018.

“However, it is not all bad news – 110 countries will gain subscribers. Asia Pacific will contribute six of the top 10 countries by pay TV subscriber additions. From the 81 million additional pay TV subs between 2018 and 2024, 29 million will come from India, 16 million from China and 8 million from Indonesia”.