Alexa to launch on LG TVs 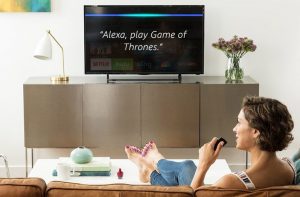 Amazon Alexa, the AI assistant that launched with the Amazon Echo smart speaker in 2015, will be available on LG Smart TVs in North America later in May.

The update will come to sets in Europe and Asia at a later date.

It was previously announced in January that Alexa would come to ThinQ AI TVs from LG’s UHD, NanoCell and OLED.

Alexa will function through the remote’s Prime Video button. Users can press the button and then speak as they would to other Alexa devices. The LG TVs will support Alexa skills and routines, along with controlling smart home devices.

LG TVs also support Google Assistant, and Apple is bringing support for AirPlay 2, Homekit and Siri to the range as well. This means that in the coming months users will have three separate smart assistants to choose from on their TV.