IPTV reception surpassed digital-terrestrial TV in France last. year, according to the latest figures released by media regulator the CSA. 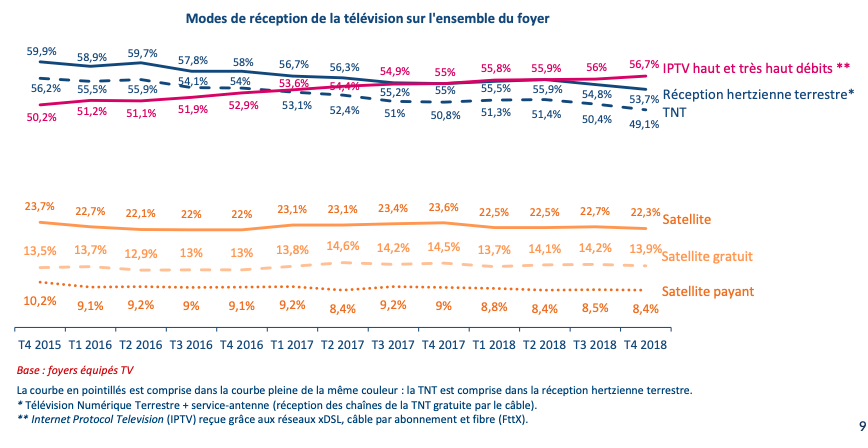 According to the CSA’s Audiovisual Equipment Observatory report, which looks at audiovisual equipment used by households in metropolitan France, IPTV, which was running equal with DTT in 2017, has now surpassed terrestrial reception with 56.7% of homes having an IPTV connection compared with the 53.7% that receive digital-terrestrial TV.

IPTV’s lead is even greater in terms of accessing content via the main TV in the home, with 54% using IPTV boxes for the main screen, compared with 42.8% using DTT for these.

Almost a third of households now have more than one form of TV reception, with 19% using a combination of DTT and IPTV and smaller numbers combining DTT and satellite or IPTV and satellite. Some 34.4% use IPTV alone, compared with 10% using satellite alone and 22.4% using DTT alone. Cable reception is counted as part of the IPTV figure.

Over three in four households had a TV connected to the internet at the end of 2018, of which 33% had a smart TV and 79% were connected via an ISP-supplied IPTV decoder.

Some 37% of homes with connected TVs used a game console to hook up their TV, while 18% used a streaming device such as Chromecast or Apple TV and 17% used a computer.

Only 38% of homes with an IPTV operator box used it to connect to TV services other than linear channels on a regular basis, while users of streaming boxes were more inclined to use them with 42% reporting regular use.

However, of those that did use their IPTV box frequently, some 93% used it to view catch-up TV regularly compared with only 79% using streaming boxes for the same function. Users of streaming boxes, smart TVs, and game consoles were more likely to use them to watch other video content online.

Over half of IPTV box users also regularly accessed additional content related to a programme being aired live via their boxes.