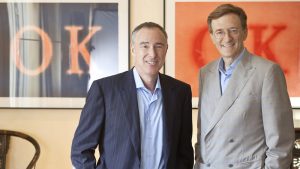 The company, which will launch with a US$400 million (€357 million) initial public offering, is the fifth acquisition firm launched by the pair since 2011. Such companies have grown in popularity and momentum with the technologically-driven disruption in the market as a means for investors to capitalise on new players.

Diamond Eagle’s primary focus will be investing in media companies.

In his three decades of work in the industry, Sagansky has served as president of CBS Entertainment between 1990-94, CEO of Paxson Communications from 1998-2003, and as president and CEO of WillScot Corporation from August 2015 to November 2017.

Sloan was the founder, chairman and CEO of Europe’s second-largest broadcaster, SBS Broadcasting. More recently, he had previously worked as the CEO and chairman of MGM between 2005-09, prior to the completion of its restructuring which came as a result of a prepackaged bankruptcy.