US viewers cut the cord in record numbers 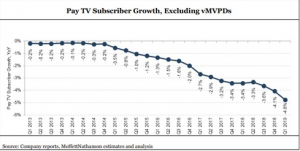 According to media and telecom researcher MoffettNathanson, combined losses from cable, satellite and telco TV reached 1.4 million. This figure is 75% worse than the same period year-over-year, and was the largest percentage rate of decline (-4.8%).

While that is the headline figure, researchers at MoffettNathanson have argued that the key takeaway from the report is around virtual multichannel video programming distributors (vMVPDs) such as Hulu, YouTube TV and Netflix. It had been predicted that vMVPD 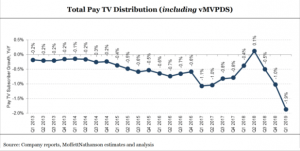 subscriptions would grow to offset the decline in Pay TV, but this has not proved to be the case, with growth slowing “significantly” in Q1.

As little as 40% of the 1.4 million traditional subscriptions that were lost in Q1 converted to OTT-TV providers, compared to 59% over the last 12 months, and 89.4% in the year-over-year quarter.

In total, distribution for cable networks in the US has recorded its worst-ever decline (-1.9%).

“Cable operators are increasingly indifferent to video retention, and the wheels are rapidly falling off satellite TV,” Craig Moffett, analyst at MoffettNathanson said. “With Q1 cord-cutting results now in the books, it may still be too early to abandon ship… but it’s not too early to put on the lifejackets.”