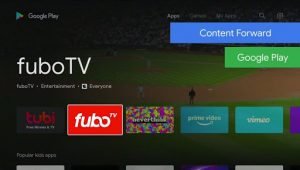 Google has revealed the latest iteration of Android TV, with a major overhaul of the Play Store being front and centre.

At its I/O developer event, Anwar Haneef, product lead, Android TV Ecosystem & Integrations, unveiled a ‘complete refresh’ of the Play Store on Android TV. This refresh gives the interface a cleaner look that catches up with the Oreo redesign of Android TV. In practical terms, the new look comes with a focus on improving the downloading of apps and subscribing to services.

This is achieved by allowing publishers to combine the installation of an app with signup and login processes, with purchasing being made more convenient through the use of PIN codes. This removes the need for awkward logins through on-screen keyboards and lengthy subscription forms.

“This will further streamline the purchasing process on Android TV and make it much easier without the need for a password,” said Haneef. “Purchases on Android TV will be smoother, faster and more seamless.”

The updated Play Store will be released separately from the next Android TV full update. In an interview with Variety, Shalini GovilPai, director of Android TV, justified Android TV’s historically slower updates, saying that it doesn’t “necessarily need to be on the same timeline” as its mobile counterpart.

During the presentation, GovilPai also boasted Android TV’s success, stating that the operating system is being used by six of the top ten smart TV OEMs and over 140 pay tv operators worldwide. She also said that this momentum extends to developers with over 1,000 streaming content providers and over 5,000 Android TV apps on Google Play.

The presentation also showed a brief glimpse of the long-awaited Prime Video app. In April. Amazon and Google announced a truce that will see YouTube on Amazon Fire devices, and Prime Video app for Chromecast and Android TV.

The full presentation from Google I/O can be viewed here.