YouTube Premium series Cobra Kai has topped Parrot Analytics’ list of in-demand digital originals in the UK for the week ending May 5. With an average of 6,332,298 demand expressions for the week, Cobra Kai was significantly ahead of Star Trek: Discovery (4,718,657), the CBS Discovery title that is distributed by Netflix internationally. 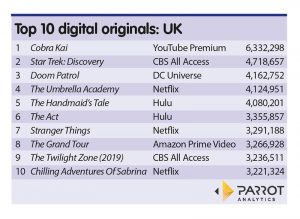 In third place, the DC Universe title Doom Patrol garnered an average of 4,162,752 demand expressions for the week. This is somewhat surprising, as the newly launched DC Universe streaming service is exclusively available in the US, with no legal way to watch the show internationally.

Elsewhere, Netflix’s The Umbrella Academy is third on the list, followed by Hulu series The Handmaid’s Tale. Hulu’s The Act, in fifth, is not currently streaming in the UK, though the show is expected to come to Channel 4 and stream on All 4.Netflix series Stranger Things and Chilling Adventures of Sabrina were also in the top 10.

Other non-Netflix titles include Amazon Prime’s The Grand Tour and the CBS All Access 2019 reboot of The Twilight Zone.