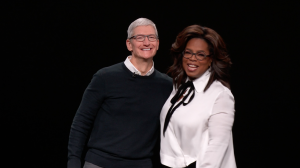 Apple believes that consumers will take its new TV service as one of a set of multiple OTT TV offerings that the majority of people will sign up for, according to CEO Tim Cook.

Speaking on Apple’s fiscal Q2 earnings call, Cook said that there was “a huge move from the cable bundle to over-the-top” among consumers, and that Apple TV+ would play to that.

“We think that most users are going to get multiple over-the-top products. And we’re going to do our best to convince them that the Apple TV+ product should be one of them,” he said.

Cook confirmed that Apple TV+ would launch this autumn. Ahead of that, Apple will roll out its new Apple TV app this month, bringing together ways of accessing TV services via the iPhone, iPad, Apple TV, Mac, smart TVs and streaming devices. Apple TV Channels will also be available, bringing services like HBO, Showtime and Starz to Apple TV users.

Cook was speaking after Apple revealed that iPhone sales had fallen 17% in the first quarter, highlighting the company’s need to diversify its revenue streams, something that Apple TV+ and other subscription services are designed to address.

The company posted quarterly revenue of U$58 billion, a decline of 5% from the prior year quarter, and quarterly earnings per diluted share of US$2.46, down 10%. International sales accounted for 61% of the quarter’s revenue.