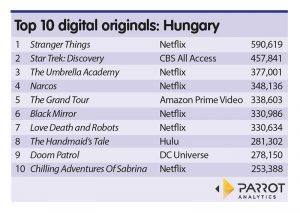 In a list mostly dominated by Netflix titles, Stranger Things garnered an average of 590,618 demand expressions for the week, with Star Trek: Discovery scoring an average of 457,841.

Netflix’s The Umbrella Academy and Narcos made number three and four on the list respectively, with Amazon Prime Video’s The Grand Tour taking fifth place on the list.

Other Netflix titles that made the top 10 were Black Mirror, Love Death and Robots and Chilling Adventures of Sabrina.

Non-Netflix titles includes The Handmaid’s Tale, made for Hulu in the US, and DC Universe’s Doom Patrol.