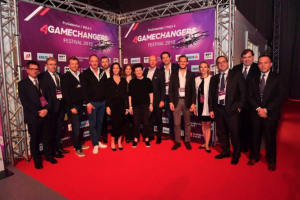 The chief executives of companies participating in the European Media Alliance have reiterated their commitment to collaborating in areas including streaming, joint technology initiatives and new revenue opportunities.

The group marked its fifth anniversary be convening in Vienna yesterday, at the digital 4Gamechangers Festival hosted by ProSiebenSat.1 and Puls 4.

The CEOs of ProSiebenSat.1 Media, Italy’s Mediaset, the UK’s Channel 4, Greece’s Antenna Group, Portugal’s Impresa Group and TVN Discovery Poland reiterated their commitment to use the EMA as a joint platform for joint initiatives in video streaming, technology, and monetisation.

“We all fundamentally believe that by international cooperation, we will obtain a competitive edge in our local markets. The European Media Alliance is the ideal platform to build such a collaboration. That is why we are now sending a strong signal of unity in addressing the most pressing issues our industry is facing. Together, we reach over 550 million possible viewers and users across Europe, leaving us with a perfect basis to scale our existing offerings and to leverage our innovative power,” said Max Conze, CEO of ProSiebenSat.1