Thinkbox, the marketing body for commercial TV in the UK, claims that television accounted for 94.6% of video advertising last year, despite an ongoing shift in viewing habits. 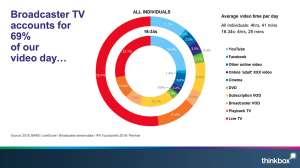 According Thinkbox’s analysis, which is based on data from sources like comScore and the IPA, TV ad revenues showed “remarkable stability” with 2018’s share of the video ad market down only slightly from 95% in 2017.

“The remaining 5.4% of total video advertising viewing is shared between YouTube (3%), Facebook and other online video (2%), and cinema advertising (0.4%),” the research claimed. “In total, the average person in the UK sees 18.5 minutes of video advertising a day. Only a minute of that is something other than TV.”

Thinkbox estimates that people in the UK watch 4 hours and 41 minutes of video a day, with broadcaster TV services accounting for 69% of this – down 2% compared to 2017, thanks mainly to increased viewing of SVOD services.

Across the population as a whole, Thinkbox estimates that YouTube accounts for 11.1% of video viewing, SVOD for 8.9%, adult content for 3.5% and Facebook for just 1.4% of viewing.

“While TV viewing is certainly changing, it is hard to ignore TV’s continued pre-eminence in the overall video advertising landscape,” Thinkbox concluded.

Thinkbox is the marketing body for commercial TV in the UK. Its shareholders are Channel 4, ITV, Sky Media, Turner Broadcasting and UKTV. Discovery Networks UK and Ireland and STV also give direct financial support.