Asia Pacific pay TV growth over the next five years will be robust but will likely be softer than previously thought because of Chinese cable subscribers cutting the cord in favour of OTT TV services, according to Digital TV Research. 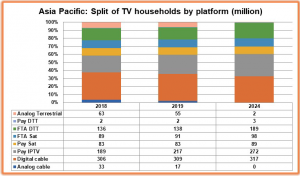 According to the research outfit, APAC pay TV subscribers will rise by 68 million over the next five years, with China and India together supplying two-thirds of the extra numbers, while revenues will increase by US$2.35 billion.

China and India together will account for 80% of the region’s 681 million pay TV subscribers by 2024, meaning they will likely grow at a slower rate than the rest of the region.

The pay satellite TV sector is mature, according to Digital TV Research, with only six million subscribers to be added between 2018 and 2024 to take the total to 89 million. Thanks to consolidation, India will lose nearly three million subscribers.

Digital TV Research’s Asia Pacific Pay TV Forecasts report also predicted that Reliance is poised to shake up India’s fixed broadband sector with its Jio GigaFiber operation as it has done in the mobile sector, and that Indonesia, the region’s third most populous country, will enjoy substantial IPTV growth.

Simon Murray, principal analyst at Digital TV Research, said: “IPTV is the biggest pay TV winner – adding 83 million subscribers between 2018 and 2024 to take its total to 272 million. Much of this growth will happen in China [up by 40 million] as cable subs convert to OTT or IPTV and in India [up by 28 million].”