US broadband homes turning to TV screen for OTT content

Over half of US broadband households are now watching online TV on internet-connected TV screens, according to research by Parks Associates. 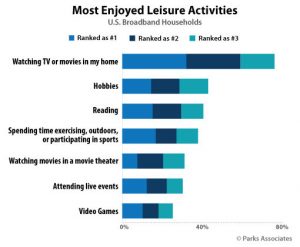 According to Parks’ 360 View: Digital Media and Connected Consumers report, some 52% of US broadband households now watching online video on a TV that is connected to the internet.

Some 55% of households said that watching TV or movies at home is one of their top two favourite leisure activities.

The research found that 19% of consumers subscribe to either Netflix, Hulu, or Amazon Prime Video and another OTT service, compared to 13% in 2017.

Local broadcast/channels and programs are the most enjoyed type of programming.

“The number of hours consumers report watching video on a TV increased for the first time since 2014, with connected devices enabling internet video services on TV and shifting consumers away from PC and mobile viewing. As OTT competition becomes a battle for the living room, the challenge for device makers and content producers is finding the correct product mix to maximize both profit and utility.”