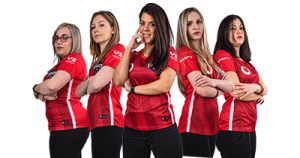 Vodafone España has taken forward its involvement in eSports by sponsoring the creation of a new all-female eSports team that will compete in Counter Strike: Global Offensive (CS:GO) competitions.

The five-woman team will compete in mixed and all-female events.

Vodafone said that the initiative was designed to contribute to the development and growth of eSports in the country.

Yesterday’s edition of Vodafone’s eSports show on Twitch, Ask Me Anything, featured an interview with one of the multinational team’s members, Aída García Cortes.

Spanish telcos have invested significantly in Esports, with Vodafone’s rivals Telefónica and Orange both supporting the growing activity. Vodafone’s involvement is anchored in its support of the Vodafone Giants team, of which the female group is a part.

“The presence of women in Vodafone’s eSports project has been important since we got involved in this area three years ago. A good proof of that is Maya [Pixelskaya], our presenter [of Ask Me Anything], and the girls who work in the streaming and content production team. Having players within the club’s team structure was an ambition shared from the beginning of the alliance between Vodafone and Giants in April 2018, and the presentation with such fanfare today of this team is the result of many months of work on the part of the club,” said Cristina Barbosa, Vodafone España’s director of branding.