Five subscription video-on-demand services accounted for around 84% of active paid subscriptions in the European market at the end of last year, according to Kagan research. 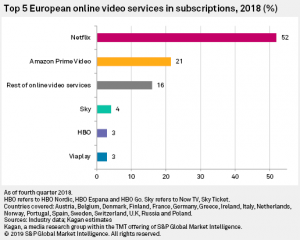 Breaking down the usage of various services, The S&P Global Market Intelligence research group said that, as of the fourth quarter of 2018, Netflix accounted for 52% of online video service subscriptions and Amazon Prime Video for 21% in Europe.

“Currently, five services accounted for 89% of the US$6 billion in consumer spending attributed to subscription online video services.”