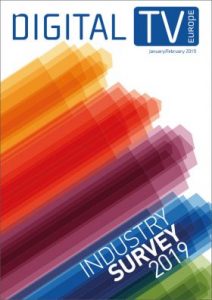 Industry executives overwhelmingly believe that OTT TV is set for growth and pay TV will decline either in terms of absolute numbers, or relative to OTT TV, according to Digital TV Europe’s Annual Industry Survey.

According to DTVE’s 2019 survey, available to download here, over two in five digital TV industry executives believe that OTT TV will grow while traditional pay TV services will decline over the next year.

Industry executives also believe that the ongoing wave of Initiatives by traditional broadcasters to combat the power of Netflix and Amazon by launching their own streaming services will have a positive impact on the global digital TV business, with over three in four respondents taking this view.

Executives furthermore take the view that the launch of direct-to-consumer OTT TV services by big media companies such as Disney and AT&T Time Warner will have a positive impact on the global digital TV business, with 82.5% of respondents to the survey endorsing this view.

Other survey results include that over three in five executives think Netflix had the biggest impact on the business of digital video distribution over the last year.

Over 560 video industry executives from 64 countries responded to Digital TV Europe’s survey this year, giving their views on topics including the virtual operator, the TV user experience, the future of the set-top box, HbbTV, OTT live streaming and the Gigabit network.