Netflix’s The Umbrella Academy was by far the most ‘in-demand’ digital original in Ireland for the week ending February 24, according to Parrot Analytics. 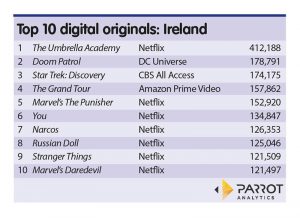 According to Parrot, The Umbrella Academy, an adaptation of a US comic book series which premiered on the streaming platform on February 15, garnered an average of just over 412,000 demand expressions, far ahead of second-ranked Doom Patrol from DC Universe, which also launched on the DC streaming platform in the US in mid-February, garnered an average of just under 179,000 demand expressions, but is not yet available in the Irish market.

CBS All Access’s Star Trek: Discovery, which is distributed by Netflix internationally came third on the list, followed by Amazon Prime Video’s The Grand Tour. All the other top 10 titles were from Netflix: Marvel’s The Punisher, You, Narcos, Russian Doll, Stranger Things and Marvel’s Daredevil.