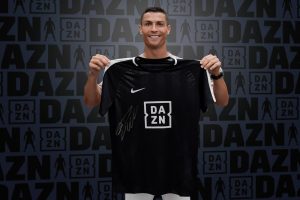 The Spanish service is priced at a monthly fee of €4.99, somewhat less than in other European markets, which DAZN says reflects the content available. A spokesman said the price may be adjusted in the future as more content is made available.

DAZN’s spokesman said the company could interested in licensing the rights to show Champions League and La Liga football under the right conditions, with the bulk of premium football rights in Spain held by Telefonica. However, he said, DAZN feels it has a strong proposition for the market, including the Premier League, MotoGPand EuroLeague basketball, among others.

DAZN also announced that the Spanish service would air In Our Blood, the third DAZN original series, a three-part doc following the story of three motorcycling champions. There will be more original content on the platform in the future.

DAZN is also limbering up for a launch in Brazil, with an April debut in that market targeted.

The streaming company has targeted launches in 20 markets by the end of next year, focusing on markets where rights are available and streaming is popular, said DAZN’s spokesman.

DAZN believes that its Brazilian debut will provide an excellent launchpad for the Latin American market. The company has the rights to the Copa Americana, Serie A and Ligue 1 football in Brazil, with more rights to come. The sports streaming service has teamed up with terrestrial broadcaster Rede TV to extend the reach of its brand in Brazil. The broadcaster has sub-licensed some football matches with DAZN’s bug in view on screen, enabling the streamer to reach “a huge number of sports fans”, according to its spokesman, with those who want more games able to sign up for the full streaming offering.

DAZN will also work with Lusophone footballing legends Neymar, Mourinho and Cristiano Ronaldo dos Santos in Brazil, with Ronaldo cross-posting games streamed on the platform to his own widely-followed social media feeds.