S&P: half of fixed-line broadband homes in APAC get speeds of 100 Mbps

Roughly half of all fixed-broadband households in the Asia-Pacific region have a connection with download speeds of 100 Mbps or greater, according to Kagan. 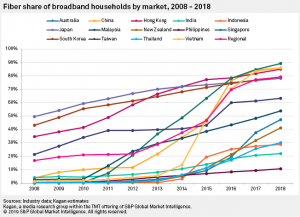 The S&P Global Market Intelligence research group found that as of the first half of 2018, 49.3% of fixed broadband households across 14 markets could access these broadband speeds, equating to 248 million homes.

China accounted for 188 million of the high-speed connections, followed by Japan’s 35.8 million connections and South Korea’s 17.4 million. These countries were also the top three broadband markets in the region by overall subscriber base.

“In nearly all markets, FTTP broadband households have rapidly become more prominent over the past 10 years, thanks to a number of national broadband initiatives that have honoured strategic importance to fibre technologies,” according to the report.

By comparison, the remaining Southeast Asian markets, as well as India, each had less than 5% of broadband households connected to 100 Mbps or above services, with India at the bottom of the list with just 0.6%.