PwC: Netflix passed US pay TV use for the first time in 2018

The ‘cord-cutting revolution’ continued in 2018 with Netflix surpassing cable and satellite usage in the US for the first time, according to PwC research. 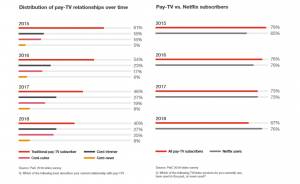 “Our data shows that there is a convergence between older and younger generations,” said PwC.

At the same time, 22% of consumers aged 25-34 reported being in a ‘healthy’ and ‘committed’ partnership with their pay TV provider, compared to 16% among those aged 50 and above.

Fewer people overall said they felt “trapped” by their pay TV provider – 20%, down from 22% last year.