Viasat World has expanded the reach of its premium drama channel, Epic Drama, in Hungary after launching via operators Magyar Telekom and Vidanet. 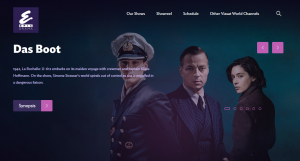 Vidanet launched the channel for subscribers to its family package.

Viasat World said that the period drama channel and SVOD service now reaches more than 50% of TV subscribers in the Hungarian market overall, and is available to more than 10 million subscribers via more than 60 operator partners across the wider Central and Eastern Europe (CEE) region.

“We pride ourselves on the close working relationship we have with operator partners, understanding their needs and those of the audience in the markets where we broadcast,” said Tamas Horvath, commercial director at Viasat World.

“We are delighted that Magyar Telekom and Vidanet have decided to extend their offering having seen how Epic Drama has resonated with viewers in Hungary over the last 12 months.”

Magyar Telekom’s head of TV and entertainment, Annamária Rajki, added: “Our company continuously monitors subscribers’ needs, and we are delighted to be able to broaden our package by offering a high-quality drama channel which stands out from the crowd.”