HTC Vive unveiled two new virtual reality headsets, along with new software and content offerings, on the eve of CES. 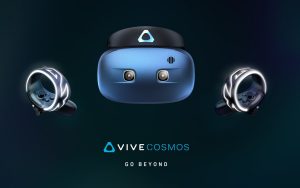 Targeted at professional VR users, the new device is due to launch in the second quarter of 2019.

The second new headset is the Vive Cosmos, which HTC said will require no external tracking and can be used at home or on-the-go, with an emphasis on ease of set-up and use.

While full details of the Cosmos are yet to be revealed, HTC said it has the capability of being powered by “more than a traditional gaming PC,” citing “new play environments” for out-of-home use.

The first Cosmos developer kits are due to be released in early 2019, with more details about availability and price to be announced later in the year.

“We found that over 85% of VR-intenders believe that ease of use and set up is the most important factor to consider while purchasing a headset,” said Daniel O’Brien, general manager, Americas, for HTC Vive.

“We believe Cosmos will make VR more easily accessible to those who may not have invested in VR before and also be a superior experience for VR enthusiasts.”

On the content front, HTC is upgrading its Viveport subscription service and will introduce Viveport Infiity on April 5. This will let users download and play any of the 500-plus titles in the new Viveport Infinity library.

“When we first launched our subscription service, we gave consumers the ability to try 5 titles a month,” explains Viveport president, Rikard Steiber. “Now with Viveport Infinity, we’re offering our members the best value in VR content with 100-times more choice, all at one low price.”

The Vive Cosmos will be the first Vive headset to feature the Vive Reality System.

“Our philosophy has always been focused on developing great products and experiences that create a natural and effortless bridge from the real world to the virtual world and with Vive Reality System we set out to reimagine Vive’s core software experience to meet these needs,” said Drew Bamford, vice-president of Creative Labs at HTC Vive.

“The tools and environments that make up Vive Reality System aim to make spatial computing accessible to everyone, wherever their journey into immersive worlds takes them. We want VR to feel less like launching apps and instead like stepping between worlds.”