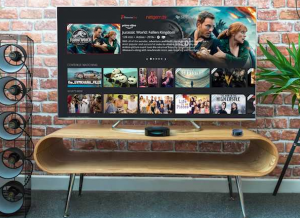 Netgem said that the NetBox 4K is the first device in the UK combining full 4K media streaming capabilities over high-speed WiFi, with the complete line-up of Freeview live channels, catch-up players and TV recording.

Users sign up via an app on iOS or Android which will give them access to recommended content based on their preferences, according to Netgem. When the TV is on or the app is opened, users can enjoy their favourite shows, watch live or recordings, cast their favourite on-demand series or movies onto the main TV, and using their smartphone as a companion app for searching content and controlling the TV.

The 4K device also offers recording capability via a USB memory stick. Netgem says the device is the most affordable 4K PVR in the market, by simply adding a memory stick, instead of buying an expensive hard-drive PVR.

“This represents a key step in the journey of reinventing the company as a consumer facing brand. There are still obstacles, but represents a great alternative to costly TV services for consumers. A great partner for telcos and other providers looking to offer a TV service with a wealth of content,” said Paolo Pescatore, SVP of consumer serivces at MIDiA Research, commenting on the launch.