Video’s share of the global mobile traffic is due to climb from 60% today to 74% in 2024 as 5G establishes itself as the fastest generation of cellular technology to be rolled out around the world. 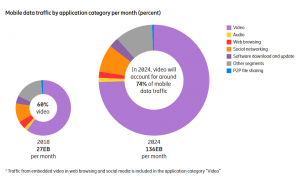 This is according to the latest edition of the Ericsson Mobility Report, which predicts that 5G will account for 1.5 billion enhanced mobile broadband subscriptions by the end of 2024, reaching more than 40% of the planet’s population.

Video traffic is forecast to grow by around 35% annually through 2024 – increasing from 27 Exabytes per month in 2018 to 136EB in 2024 – and is expected to be the main driver behind the growth in mobile data traffic.

“The increase in video data traffic per smartphone user has three main drivers: increased viewing time; more video content embedded in news media and social networking; and an evolution to higher resolutions and more demanding formats,” according to the report.

While most mobile video today is streamed at low-definition 360p and standard definition 480p formats, user behaviours are shifting as network capabilities expand and are expected to “change more dramatically” as 5G services are made available.

“The streaming of high-definition (HD) video in 720p and 1080p resolutions is increasing, and the average resolution of a YouTube video in some LTE networks is already up to 720p.”

By 2024 Ericsson predicts that a smartphone will consume more than 21GB of data per month on average, nearly four-times the amount consumed in 2018. The number of smartphones subscriptions is also expected to increase by 45% to 7.2 billion.

“As 5G now hits the market, its coverage build-out and uptake in subscriptions are projected to be faster than for previous generations,” said Fredrik Jejdling, executive vice president and head of business area networks, Ericsson.

“At the same time, cellular IoT continues to grow strongly. What we are seeing is the start of fundamental changes that will impact not just the consumer market but many industries.”

Between 2018-2024, total mobile data traffic is expected to increase by a factor of five, with 5G networks projected to carry 25% of mobile traffic by the end of the forecast.