Ofcom: smart TVs, smartphones and wearables are on the up

Smart TVs, smart watches and smartphones are among the digital devices that have seen “significant increases in ownership” in recent years, according to Ofcom. 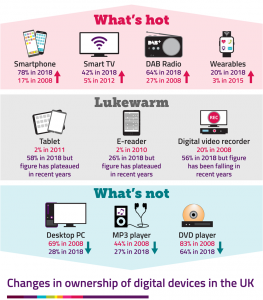 The UK broadcast regulator said that Brits are “ditching their DVD players and desktop PCs” and increasingly turning to newer technology – with smartphones now found in 78% of homes, up from just 17% in 2008.

The stats show that smart TV ownership in the UK now stands at some 42%, up from 5% in 2012. DAB radios have also show strong growth in recent years with uptake now at 64%, while wearable devices like smart watches are now owned by 20% of Brits.

Tablet and e-reader ownership was found to have plateaued at 58% and 26% respectively, while digital video recorder ownership stands at 56%, but has been falling in recent years.

“As technology evolves and transforms how we live our lives, the devices we rely on are constantly changing,” said Ian Macrae, Ofcom’s director of market intelligence.

“The growth in popularity of streaming services has created tremendous demand for connected TVs, which for many people are replacing DVD players, and the smartphone is replacing several other devices at once. The range of connected devices is expanding rapidly. Smart speakers really took off last year and along with other smart home devices will again be ones to watch this year.”