BT-owned mobile operator EE has staged its first live trial of remote production broadcast over 5G in partnership with BT Sport, ahead of a full test at the weekend. 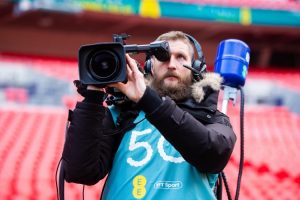 EE claims that the EE Wembley Cup 2018 – an event featuring YouTube stars and sports teams like Hashtag United and Rebel FC – will be the first live sporting event to be broadcast over 5G using remote production.

EE and BT Sport demoed the capability by delivering a live, two-way broadcast over 5G from Wembley Stadium to London’s ExCeL Exhibition Centre. The trial broadcast was carried over 5G and then produced remotely by the BT Sport production crew at BT Sport’s base in East London.

“This trial is another showcase of what our 5G network can do, and is a big part of our continued investment in using 5G across the whole of BT Group,” said Marc Allera, CEO of BT’s consumer business.

BT Sport chief operating officer, Jamie Hindhaugh, said: “5G will next season enable BT Sport to deploy the most advanced remote production of any broadcaster. It will allow us to cover more live matches from more leagues and competitions, and to bring fans highlights action closer to the final whistle than has ever been done before in the UK.”

The trial used EE’s 5G test network in Wembley Stadium, which uses EE’s 3.4GHz spectrum from its first 5G antenna connected to a 10Gbps backhaul link. EE said will be continuing the rollout of 5G in Wembley Stadium throughout 2019.

The mobile operator also recently started 5G trials in London and announced plans to launch 5G in 16 cities across the UK in 2019.

The EE Wembley Cup takes place at Wembley Stadium on November 25 and is touted as an “epic tournament featuring YouTube’s most talked about teams, legends, rising stars and big new twists on old rules”.