Ampere: 32% of US web users watch videos daily on their smartphones

Almost a third of US internet users watch online video on their smartphones every day, the highest proportion of anywhere in the world, according to Ampere Analysis. 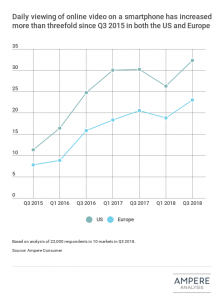 The research firm estimates that during the third quarter of 2018, some 32% of US internet users watched video on their smartphone daily, compared to 23% in Europe.

However, the proportion of daily online smartphone viewing has increased more than threefold since the third quarter of 2015 in both the US and Europe.

“As online video viewing in the US continues to grow, consumers are watching TV and film content on a wide range of devices, especially smart TVs and smartphones,” said Ampere analyst, Hannah Walsh.

“While the online video sector in the US has developed faster than European markets, a similar trend can be seen in both regions.”

The research found that out-of-home viewing was more common in the US, with 17% of US internet users strongly agreeing that they frequently use a smartphone, tablet or laptop to watch video outside home, compared to 9% in Europe. Overall 47% in the US agreed that they watch content outside on the home regularly, compared to 35% in Europe.

US web users were also more likely to strongly agree that online video services are the main way they watch TV or films at 19%, compared to 11% in Europe. In total 47% in the US agreed that online is their main viewing option, compared to 35% in Europe.

“As subscription VOD continues to progress in European markets, the proportion of consumers who watch video on smartphones will rise, alongside the number of consumers who use online video services as their main way to watch TV,” said Walsh.