Liberty Global will use proceeds from the sale of its German and CEE businesses to Vodafone principally to return cash to investors in the form of buybacks and has no plans for big acquisition, according to Charlie Bracken, the company’s EVP and CFO, speaking at the Morgan Stanley European Media & Technology conference last week.

Bracken said that proceeds from the sale could in theory be used to pay down debt, buy back stock or make acquisitions. However, he said, Liberty is now more or less “strategically complete” and “there is no transaction we need to do”. He said that big acquisition activity could “be ruled out”.

Bracken did however admit that using cash from the sale to reduce debt was “more interesting”, particularly in view of the smaller post-transaction scale of the company. Leverage works against companies when the risk premium is too high, he said.

“As you shrink your portfolio, and as your growth profile changes, you have to evaluate your leverage,” he said. While Liberty will likely keep its debt in the four to five times EBITDA range, it may be towards the lower end of that range in the future, he said.

Share buybacks are however the top priority, said Bracken, particularly in view of Liberty Global management’s perception that the shares are undervalued. “We perceive very real fundamental value at these levels and we are attempting to put our money where our mouth is,” he said. 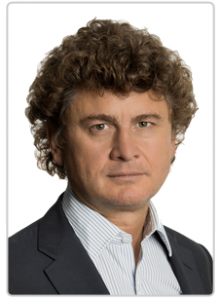 Turning to Liberty’s future after the Vodafone deal is completed, Bracken said the UK was “the most attractive cable asset in Europe from a growth point of view”. The core Virgin Media business has likely 2% operating cashflow growth rates in prospect and aims to convert that to 10-15% free cashflow, in line with other assets the company has, he said.

Bracken said that Virgin Media was now essentially two businesses in terms of its ‘growth story’: the existing core business and Project Lightning, its build-out of networks to new areas. Growth in the core business was low, but could come from a higher share of the small office-home office business. He said that while Virgin’s mobile penetration had been “disappointing”, the major disappointment for the company as a whole “has been on pricing”, thanks to the challenge of raising prices for what is perceived as a high-end product.

Project Lightning, however, is the real growth story, he said. “That is a business, if you disaggregated it, that has very high growth,” he said. However, with the cost of build out amounting to about £600-700 a home, Project Lightning would generate negative free cashflow for some time, he added.

Bracken said that Virgin Media was achieving penetration in the mid-30% range in new build areas , and he expected that the company would “get better at this”. Even at 30%, the returns are “very attractive”, he said.

Apart from Project Lightning, Liberty next year will see more free cashflow, with this being particularly attractive in view of the fact that Liberty does not pay tax in the UK.

Bracken indicated that the desire to improve cashflow may lead to a change in the way Project Lightning is structured. “We have got to decide how we handle Lightning, because I think it is a very valuable business but it’s a negative cashflow business,” he said.

Addressing the challenges Virgin Media faces, Bracken said that, despite Brexit, the UK was still “fundamentally a rich country” and noted that the company did not face huge competitive pressure.

He said that Virgin has an advantage over BT today, but fibre overbuilds create parity, preventing either side from “landing the killer punch”.

“If [BT] do fibre builds they will focus more on areas where we don’t have cable…but it will happen. The question is how much retail market share BT takes as opposed to wholesale,” he said.

Regarding Comcast’s acquisition of Sky and whether this posed a competitive threat, given that Comcast is fundamentally an infrastructure-based business in the US, he said he believed the acquisition was “a content play” to help Comcast become a “me too Netflix” for Europe. He said that if Comcast had really wanted to break into the triple-play business, “they should have bought Virgin”.

He said Comcast was “an exceptionally well-run company” and had “never been price cutters”.

Bracken said that “Ireland has been a great success story” for Liberty, including Virgin Media Ireland’s acquisition of free-to-air broadcaster TV3 to boost its video product. Virgin media Ireland had recently used that to launch a sport channel and this move “confirms the view that there are strategic advantages to using those assets to support the core business”, said Bracken. In Belgium, he said, Liberty-backed Telenet had also used sports assets to boost its business, and is trying to gain control of local broadcaster SBS, which would give it a stronger platform.

Turning to other European markets, Bracken said that the core of the challenge facing Liberty in the difficult Swiss market was video. He said that the company’s attempt to improve content by investing in sports had hit it financially but “hadn’t been the answer to the maiden’s prayer”. Liberty would now roll out its advanced Horizon 4 box to the market, which he said “would take capital” but should deliver returns.

“Getting that video right is the key, because that would enable you to bundle in broadband…and mobile,” he said.

Switzerland remains “a very profitable market” and even with capital business it should remain a positive free cashflow business. However Liberty would take a hit on profit this year and next as a result of this investment, he said. However, he said that Liberty was “not desperate” and not “in crisis mode” with a need to sell the business off urgently.

“We see the opportunity for strategic rationalisation and we are open to it but timing is to be determined. In the meantime we are focusing ion reinvesting in our core business,” he said.

Regarding Liberty’s Dutch joint venture with Vodafone in the Netherlands, Bracken said that Liberty will need to “renew its vows” with Vodafone next year, or decide whether to sell or buy. “The mobile business has priced pretty aggressively,” he said. “What happens to it, we will have to see.”

Bracken said that, in general, the next step change for the cable industry was to combine fixed and mobile assets. He said Liberty faced a range of choices here, but “the key factor for us” is that “the mobile business is a very tough business”.

“Fixed mobile convergence does resonate,” he said, pointing to significant churn reductions in mobile and fixed for combined customers in the Netherlands.

However, while Liberty believed in the combination of mobile and fixed assets in terms of synergies and cost savings, the experience in Belgium and the Netherlands had shown how tough it was to make it work, with declining mobile ARPU.

Having MVNOs enables the operator to reduce churn and be competitive, but moving from that to owning the underlying assets requires an analysis based on price, he said. Liberty current operates successful MVNOs in the UK and Switzerland, and does not need to do transactions in those markets, he said.