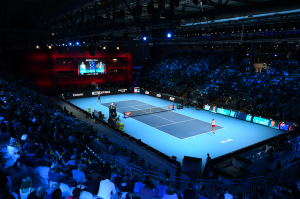 ATP Media, the broadcast arm of the ATP World Tour, has produced and distributed a 1080p50 HDR test feed at last week’s Next Gen ATP Finals in Milan.

Carried out in partnership with Gearhouse Broadcast, the test covered the live and non-live workflows on site, marking the first time HDR content has been natively incorporated into replays and edit workflows on a live sports outside broadcast, according to the pair.

The test follows an initial 1080p50 HDR production trial during the Nitto ATP Finals in 2017, which put 4K and 1080p50 HDR side-by-side in a live tennis environment for the first time.

ATP Media concluded from that test that it 1080p50 HDR rather than 4K HDR would most efficiently deliver the benefits of HDR to broadcasters and to viewers.

This year’s follow up test was hailed by the outfit as an important next step in delivering a 1080p50 HDR test feed to broadcasters with a view to gathering their feedback for future planning.

The test was also a next step in incorporating HDR and SDR content across all onsite production, including the non-live content available on the EVS network, ENG camera footage, SDR archive and SDR content from other sources, according to ATP Media.

While ATP Media has no current plans to distribute content in native 4K, 4K cameras were used on-site to capture live match coverage as high resolution acquisition is part of the workflow to produce high quality 1080p HDR for Broadcasters to distribute as part of a 4K HDR service, said ATP Media.

The Next Gen tournament is pitched as the ATP Tour’s showcase for innovation across all aspects of the men’s professional game including rule changes, line calling without humans, and player and coach data services whilst the match is in progress.

“ATP Media has a long track record of innovation and this latest test demonstrates our commitment to staying ahead of the curve when it comes to maintaining and advancing industry standards. To produce and deliver 1080p50 HDR feeds for an entire tournament over four days is a significant step not only for tennis broadcasting, but broadcasting as a whole. We now look forward to engaging with our external partners and stakeholders as we gather feedback from the test and plot our next steps.”

Ed Tischler, Managing Director at Gearhouse Broadcast UK said: “This has been an invaluable test as it has generated a lot of useful data which will help us understand more about the best way to produce content like this going forward.”