US digital advertising revenues grew 23% year-on-year in the first half of 2018 to reach US$49.5 billion, according to the IAB’s latest Internet Advertising Revenue Report. 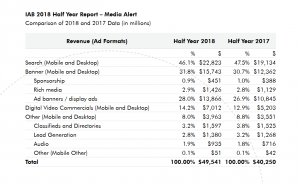 The Interactive Advertising Bureau (IAB) study, produced with PwC US, claims that advertisers spent more on digital media in H1 2018 than they have in the first half of any other year.

Search ads, banner ads and digital video ads – across both mobile and desktop – were the three biggest revenue drivers, accounting for US$22.8 billion, US$15.7 billion and US$7.0 billion of US digital ad revenues respectively.

Digital video ad revenues were up 35% from a year ago and accounted for 14.2% of the total digital ad market in the US. Within this category, 60% video ad revenue was attributed to mobile video.

Overall, advertisers spent US$30.9 billion on mobile media in the first half of 2018, up 42% from US$21.8 billion over the same period last year. IAB estimates that mobile now accounts for 63% of all digital ad revenue, up from 54% in H1 2017, and continues to be “the internet’s leading ad platform”.

“There is no question that digital advertising is top-of-mind with brand marketers,” said Anna Bager, executive vice president of industry initiatives, IAB. “Video is front and centre, experiencing a surge – especially on mobile devices. Other formats, like digital audio and social media are seeing spikes and are ripe for further growth.”