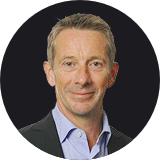 Kennedy is due to join the UK commercial broadcaster on February 1, 2019, replacing current CFO Ian Griffiths, who announced over the summer plans to retire.

Griffiths will step down from the board in December 2018 and formally leave ITV at the end of March 2019, following a handover period.

Prior to this he was CFO at UK microchip company Arm Holdings and played a key role in its £24 billion sale to Japan’s Softbank.

Between 2010 and 2015 he was CFO at easyJet, where he worked with ITV’s current CEO Carolyn McCall, and before that spent 17 years at EMI working in a variety of roles.

“Chris was the standout candidate in a very strong short list and the board are really pleased that he will bring his experience and expertise to ITV,” said company chairman, Peter Bazalgette.

“He has a great media background from his 17 years at EMI and he has built on that as a CFO of three FTSE 100 companies.”

McCall said: “I am really pleased to be working with Chris again as CFO.  He will play a huge role in helping us deliver our new ‘More Than TV’ strategy and I know he will work really well with the senior leadership team of ITV.”