The BBC would have to use the equivalent of 18% of its total service spend to continue offering free licence fees to over 75s after the costs of these are transferred to the broadcaster in 2020. 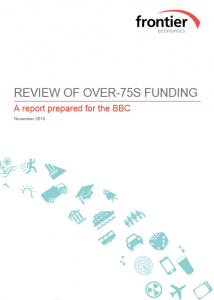 This is according to a Frontier Economics report, commissioned by the BBC, that explores the longer-term funding options relating to the over-75s TV licence concession.

Since 2000, anyone aged 75 or over has been eligible to get their BBC TV licence for free, but in 2015 the UK government decided to transfer the cost of providing this service from the government to the BBC in 2020, leading to questions about the long-term viability of the concession.

“By 2021/22, we forecast the concession, if reinstated by the BBC in its present form, will cost the BBC £745 million,” according to Frontier Economics.

With the BBC due to launch a consultation on the concession in the near future, the report set out four main options that it recommended the BBC should consider.

The first is to scrap free licence fees for over-75s entirely; the second is to replace the free fee with a 50% concession for all over-75s households; while the third option is to increase the age threshold – either to 77 or 80.

The fourth option is to introduce a means-tested eligibility for the concession by linking it to the receipt of pension credit – either keeping the age threshold at 75 or widening it to also include younger pension credit recipients.

The report estimated that these options would have differing financial impacts on the BBC, resulting in it spending anything between 10% and 87% of the full cost of continuing with the free over-75s licence fee.

A BBC spokesperson said the report “will help inform the BBC’s consultation on the future of the over 75s concession once government stops funding it in 2020.”

“There are important issues to consider and we will do nothing without consulting with the public. We will be setting out a range of options in our consultation paper. Everyone who wants to contribute will be able to do so once the consultation is published.”