Nearly four in five US internet users now have at least one subscription video-on-demand subscription with SVOD uptake in Europe also showing healthy growth, according to Ampere Analysis. 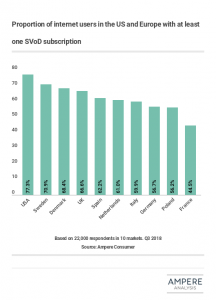 The research firm said that growth in SVOD subscriptions in the US has resumed after previously plateauing, thanks to gains at Hulu and Netflix. Some 77.3% of web users in the country subscribe to one or more SVOD service.

Across nine surveyed European countries, France was the only country where fewer than half of all internet users have at least one SVOD subscription at 44.5%. However, subscriber growth in France was up 10.6 percentage points since Q1.

Italy, Germany and Poland had SVOD use that ranged between 59.9% and 56.2% of web users, with Poland 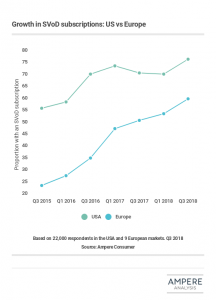 showing the most growth in SVOD use across all the countries polled – up 13.7 percentage points since Q1.

“SVOD adoption reaching an all-time high in our consumer data suggests that a selection of new subscribers may have never previously paid for such a service,” said Ampere Analysis senior analyst, Toby Holleran.

“Crossing the threshold into paying for online video content can be quite the leap for consumers, and we expect new SVOD subscribers to take even more services as they seek to build their own content bundles.”