Snapchat has partnered with a number of broadcasters and publishers to bring its TV-style Shows format to the UK, expanding the selection of local, professionally-produced content on the platform. 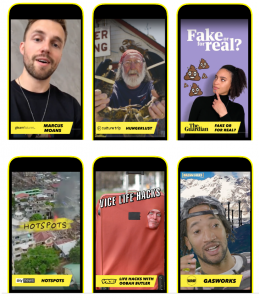 Shows are TV-like content produced in vertical format for a mobile audience which are typically between three and seven minutes in length. The content is monetised by Snap’s six-second non-skippable ad format, Commercials.

For the UK rollout of Shows, Snapchat has partnered with 17 brands – including Sky News, Vice, The Guardian, Brave Bison, Cosmopolitan UK and talent agency Gleam Futures – which will produce a total of 25 series between them.

Titles include: news programme Hotspots from Sky News; Beyond Beauty and Most Expensivest by Vice; food and culture show Hungerlust by publisher and new Snap partner Culture Trip; and Marcus Moans, an entertainment series presented by online influencer Marcus Butler, which comes from Gleam Futures.

Snap first launched Shows in the US, where companies like NBCUniversal, CBS and MTV have been producing programming for more than a year. These US shows have already allowed advertisers to reach an audience of five million UK viewers over a 28-day campaign period, according to Snap.

Speaking at a press conference in London this morning, Snap’s head of international content partnerships, Rami Saad, said: “Ever since we began focusing on bringing the Shows format to Snapchatters in the US market, we’ve seen more than triple the time spent on Shows from the beginning of the year until today.”

Saad described Shows as a new form of premium video, made for mobile, that are “very TV-like” in the way that they are presented. “We’re not talking about video clips, we’re really talking about an episode of a show that has a start, a middle and an end.”

The UK Shows rollout expands on Snap’s exiting premium content strategy, which kicked off with the launch of its Discover platform in January 2015. Snap now has 100 partners globally that post Publisher Stories to the Discover page and many of its new UK Show partners are already Discover publishers.

Saad said that Snap has not directly commissioned its first clutch of UK Shows. Instead it has had conversations with “partners that we trust and partners that we’re really excited to partner with” and is helping them monetise Show content with ads on a revenue-share basis.

Speaking at the press event in London, Gleam Future’s head of UK talent, Lucy Lendrem, said that the talent responsible for the two Shows Gleam is contributing to Snapchat are excited by the opportunity to reach new audiences.

“If there’s hard cash involved upfront it changes things,” she said. “They’re doing it because they believe that it’s interesting and exciting beyond a revenue perspective.”

Sky News’ digital output editor, Alan Strange, agreed that the value in providing its new Show to Snapchat is “not necessarily something that’s determined by how much income comes in,” adding that it is an advantage that Sky News already has a sustainable business model.

Today’s news follows Snapchat’s debut earlier this month of a host of new US Snap Originals – a separate set of exclusive shows that include Co-Ed, a new comedy from the Duplass Brothers; Class of Lies, a mystery thriller from one of the minds behind Riverdale; and Endless Summer, a docu-series following rising stars in Laguna Beach – from Bunim/Murray, the creators of Keeping Up with the Kardashian.