Mediacom: 94% of UK kids now have access to OTT services

A massive 94% of children and teenagers in the UK now have access to on-demand or OTT services like Netflix and Amazon Prime, as the trend towards on-demand viewing continues to climb. 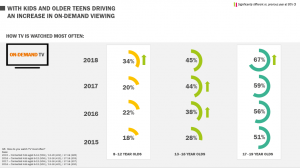 This is according to new research from MediaCom, which claims that nearly half of all teens say they currently watch on-demand TV more than live TV – with the biggest increase in on-demand viewing coming from the pre-teen age group.

Netflix remains the most used streaming service for teens, 66% of whom now have access to the platform compared to 53% in 2017. Meanwhile, 38% of teenagers said they have access Amazon Prime Video, compared to 30% in 2017, and Now TV access currently stands at 20%, up from 17% last year.

Only 6% of kids have no access to an on-demand service, down from 10%  twelve months ago, while 35% of teens said they regularly watch TV and films on their phones – up from 21% three years ago.

“The way in which teens view their favourite content online is almost unrecognisable even from five years ago,” said Josh Krichefski, CEO of MediaCom UK.

“Today’s generation are growing up as ‘on-demand natives’, able to access content whenever, wherever and however they want, and is essential to the popularity of shows such as Stranger Things, Jack Ryan and Game of Thrones.

“With the likes of Now TV and Amazon Prime Video making real in-roads in the on-demand scene and recent news of Netflix taking up 15% of all internet data, it’s no surprise streaming services are ramping up their investment in content quality, quantity and accessibility.”

Commenting on the research, Marina Koytcheva, vice president of forecasting at research firm CCS Insight said: “While the trends of shifting consumption to on-demand and on-mobile are very much present in the adult population too, clearly kids and teens adopt new technologies much faster.

“This will make the life of broadcasters and content aggregators increasingly difficult in the next decade, as they will have to support multiple platforms for distribution to reach both the younger generations who are all-in with the new, and the older generations for whom old habits die hard.”