Liberty Global, Comcast and Bell Canada are all backing a new open source software initiative that was unveiled by adaptive WiFi company Plume and Samsung at the Broadband World Forum. 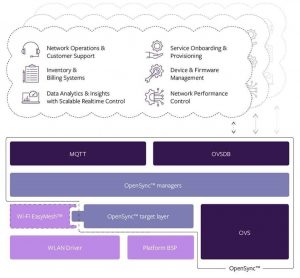 Based on the Plume Middle Layer (PML) software, which the company has now open-sourced, OpenSync forms a ‘cloud-to-hardware abstraction layer’ that enables delivery of and support to cloud-based consumer services.

The framework is compatible with other open source initiatives and industry alliances such as RDK, and OpenWRT, will initially focus on whole-home WiFi networking, management and control, and is available under an open source licence.

OpenSync is being demoed at Broadband World Forum in a number of devices – including gateways deployed by Comcast, Bell Canada and Liberty Global, and Samsung’s SmartThings IoT hub.

“For Liberty Global, a critical element of exploiting our broadband capabilities and delivering a superior connectivity experience to our customers is to ensure that we can continuously optimise WiFi performance within a customer’s home,” said Dan Hennessy, European CTO of Liberty Global.

“We’ve already used elements of the OpenSync framework to optimise WiFi in millions of homes and look forward to investigating ways in which the initiative might be applied to other use cases that may benefit our customers.”

Comcast’s senior vice president of digital home, devices and AI, Fraser Stirling, said: “Plume’s PML is already integrated with RDK and deployed within our footprint, and we look forward to incorporating additional elements of OpenSync in the near future.”

Plume CEO, Fahri Diner, said: “Driven by the influx of smart devices flowing into our homes, the next decade is all about personalisation and cross-platform experiences. As the scales move from millions of homes, to billions of people, to trillions of devices, we believe that carefully managed unlicensed spectrum and truly open frameworks become fundamental pre-requisites.”

Samsung’s vice president and head of IoT product and service, Chanwoo Park, added: “Interoperability is central to our connected living strategy and extends to our smart home devices. SmartThings WiFi, our tightly integrated mesh WiFi router and smart home hub, leverages the full OpenSync framework so people can implement the WiFi solutions that work best with their home.”