Ampere: Facebook video viewing audience in decline in US, Europe

Online video audiences for Netflix and Amazon are increasing, but Facebook is experiencing a decline in video viewing, according to Ampere Analysis. 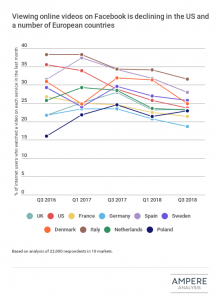 The research firm said that since the third quarter of 2016, the proportion of US internet users who have watched videos on Facebook in the past month has declined from 35.5% to 23.7%.

The US had the biggest decline in Facebook video viewing, but the proportion of video viewers on the social network were also down in a number of European countries – including Italy and Denmark, which experienced a 6.7 point and a 6.0 point drop in viewers respectively.

The only exceptions to this downwards trend were Poland, where Facebook videos viewers increased by 6.9 points, and the UK which saw a 1.6 point lift – even though UK viewers of video on Facebook were found to have been in decline since Q3 2017.

“The apparent declining engagement with Facebook video is potentially symptomatic of some of the wider challenges Facebook is facing engaging younger audiences at the moment, and the impacts of the negative press surrounding the use of Facebook data in political campaign targeting,” said Richard Broughton, director at Ampere Analysis.

“Nonetheless, video remains a priority for Facebook’s growth strategy, and recent investments in new video ad formats, as well as partnerships in the sports sector, highlight the forward-looking efforts that the social media giant is putting in to expanding this part of its business.”

Overall, across 16 surveyed markets, YouTube was the most popular online video service, being used by 68.3% of internet users each month. Netflix came second with 35.4% reach, followed by Facebook at 27.0% and Instagram at 17.8%. Amazon Instant Video came fifth with 11.7% use among web users.