The recently-announced collaboration between pay TV giant Sky and SVOD platform Netflix took a step forward today with news that the Netflix app has been integrated with Sky streaming service Now TV. 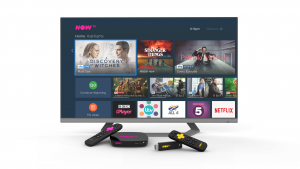 Consumers who sign-up or sign-in to their Netflix account can now switch seamlessly between Now TV Entertainment Pass series like A Discovery of Witches, The Walking Dead and Patrick Melrose and Netflix Originals such as The Crown, Stranger Things and Queer Eye.

In parallel, Now TV has also revealed the launch of its most powerful streaming device – the Now TV Smart Box with 4K & Voice Search.

Priced at £45.99, Now TV claims the new box is the lowest priced 4K streaming device in the UK. It is also available with a month’s Entertainment, Sky Cinema, Kids and Sky Sports Day Pass for £49.99 from retailers including Argos and Currys PCWorld.

Now TV managing director Gidon Katz said: “With 4K and Voice Search the new NOW TV Smart Box gets you to your favourite shows faster than ever and lets you explore the expanding world of 4K content across our apps. It also ends the struggle with TV inputs by adding Netflix to our NOW TV Smart Stick and Smart Box.”