Some 69.3% of Western European TV households will take a subscription video-on-demand service by 2023, up from 38.4% at the end of 2017, according to Digital TV Research. 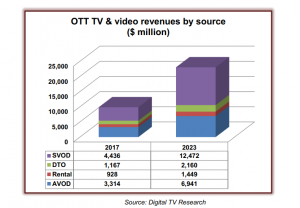 Netflix is tipped to remain the largest SVOD platform in the region “by some distance” reaching 49.75 million paying subscribers in 2023, compared to 22 million for Amazon Prime Video.

This means that at the end of the forecast period Netflix will account for half of Western Europe’s SVOD subscribers – the same proportion as it had in 2017.

The report predicts that Norway will have the highest proportion of SVOD subscribers in 2023 at 104.8%, while by this date Germany, Italy, France and Spain are all expected to “fall below the regional average”.

SVOD revenues in Western Europe are expected to almost triple from US$4.44 billion in 2017 to US$12.47 billion in 2023. The UK will remain the market leader and is forecast to generate as much SVOD revenue as second-place Germany and third-place France combined by 2023.

SVOD became the region’s largest over-the-top revenue source in 2016 after overtaking advertising-supported video-on-demand. SVOD’s share of the OTT total is tipped to reach 54% by 2023, up from 45% in 2017.

“The UK is the largest OTT revenue earner in the region by some distance. Its US$2.98 billion generated 30% of the 2017 total. The UK’s US$6.80 billion in 2023 will represent a similar proportion,” said Digital TV Research principal analyst Simon Murray.

Overall, the report predicts that Western European OTT TV episode and movie revenues will reach US$23.02 billion in 2023 – more than double the US$9.84 billion recorded in 2017.