UKTV returns to Virgin with ‘five-times as much VOD content’

UKTV’s channels returned to Virgin Media at the weekend, ending a three-week stand-off between the companies that forced networks including Dave, Gold and Alibi off the platform. 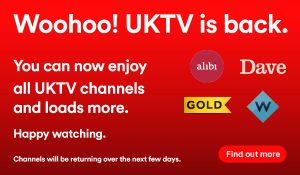 The two parties agreed a new carriage deal that restores all UKTV’s channels and adds more than five-times the amount of on-demand programming – including what Virgin described as “significantly more boxsets” for its ‘Full House’ TV package customers.

“We are sorry for what we know has been a frustrating time for our customers but are pleased that our TV bundles are now even bigger. Our unwavering commitment to investing in incredible programming remains.”

UKTV’s chief commercial officer, Simon Michaelides, also apologised for the “real disruption” that its impasse with Virgin Media caused to viewers and said the broadcaster was “thrilled to be back”. He added: “Viewers are at the heart of UKTV and we want to thank them for all of their support.”

UKTV’s portfolio of 10 channels and all its on-demand content left the Virgin platform at midnight on July 21, after the two parties failed to agree new contract terms.

Virgin blamed the spat on “restrictions put on UKTV by the BBC,” claiming the broadcaster – which is a joint venture between BBC Studios and Discovery – was “not able to provide the significant on-demand programming that we know our customers want.”

UKTV, on the other hand, said that Virgin Media had requested a “significant cut in the fees that it pays to UKTV” as part of the companies’ contract discussions – despite it offering to provide “additional value to Virgin Media and its customers”.

Virgin Media added a number of new channels to its platform compensate for the missing UKTV networks – including Vice TV, Premier Sports and Love Nature HD. These will all remain available to Virgin customers now that UKTV’s channels have been reinstated.