Close to half a million using Movistar+ Aura digital assistant

Telefónica’s Aura voice-enabled digital assistant is now being used by over 470,000 users to navigate and search for content on the Movistar+ pay TV service. 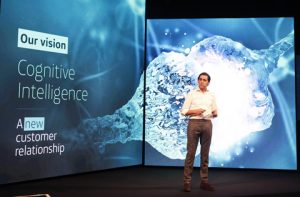 Aura is available via the Movistar+ mobile app. The service was launched for Android devices on April 19 and for iOS on May 10.

Aura for Movistar+ enables subscribers to interact with the service and to search for content by genre, by actor or director or by actual title. It also allows users to search for latest releases or live sports events, as well as to ask for recommendations, change channel or initiate viewing sessions.

Citing the results of a study it had undertaken among subscribers over the course of a month, the operator said that nine out of 10 users interviewed had continued to use Aura and would recommend it to others, with half saying it had improved their level of satisfaction with the Movistar+ service and seven out of 10 saying it had improved their impression of the operator.

The main use of the service to date has been to search for channels, movies and series using voice control.

New customers can download the Movistar+ app with Aura from the Google Play Store and Apple App Store.

Aura, which was debuted at the Mobile World Congress earlier this year, is currently available in six countries in which Telefónica operates.