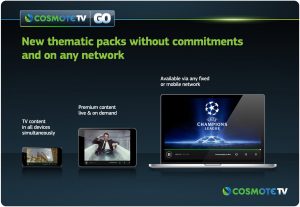 The new Cosmote TV Go packs provide premium content via mobile phone, tablet and the computer, offering subscribers the option to watch content either live or on demand, at any time, without any commitments, for as long as they want and through any mobile and fixed network.

Subscribers can choose one or more of three new thematic packs. If they chose two or more packs, they will also benefit from a discount of €2 per month for every additional pack purchased.

Cosmote TV Go offers a documentaries pack for €5 a month, a cinema pack for €10 and a sport pack for €25.

It also provides access to NBA basketball along with home basketball matches of Panathinaikos, Olympiacos and AEK from the Greek Champions league, Formula 1, MotoGP and WRC rallying, top tennis tournaments and other sports.

Cosmote TV Go subscribers can watch content via any fixed or mobile network, including on devices without a SIM card, and on all mobile devices in Greece and within the European Union. They also have the option to watch different programmes on separate devices simultaneously.