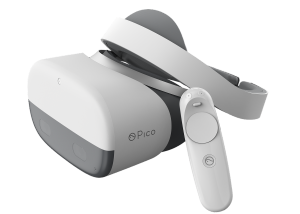 The funding round was led by GF Qianhe and GF Xinde Investment, with contributions from Jufeng S&T Venture Investment and other backers.

Pico said it will continue focusing on all-in-one VR. Its six-degrees of freedom Pico Neo headset is its flagship technology, while its Goblin headset series is aimed at the mass market.

Last year the company established a 3D sensing business unit, Pico Zense, based on time of flight (TOF) technology and it plans to continue to improve its 3D depth camera module and the core algorithm and its AI IoT solution.

Pico said it also now plans to focus on VR retail monitoring and other usage scenarios and aims to make augmented reality products available in 2019.

“Pico will keep focusing on all-in-one VR and will also increase its investment in 3D sensing (TOF) and AR technologies in the near future,” said Pico CEO Henry Zhou.

“In the future, Pico hopes to become a portal-level AI vision company through the layout of VR+AR+TOF technology and products.”