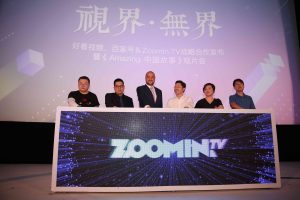 Amazing China Stories will target ‘Gen Z’ viewers in the country and will consist of 12 episodes per-month for a year.

The episodes will showcase “Generation Z stories of Chinese living abroad, domestic pioneers, international fans of Chinese culture and other compelling stories,” said the companies in a statement.

Baidu vice president, Shen Dou, said that the deal stems from the “positive values both parties share and also signifies the progress Baidu is making in the field of short formats.”

Zoomin.TV CEO, Roger Lodewick, said: “This strategic cooperation with Baidu is our next step in showing Generation Z in China that we’re the main source of compelling, positive and relevant short-form content created especially for them.”

Amsterdam-headquartered Zoomin.TV has a global network of more than 3,000 video journalists working across more than 110 countries. With the Baidu deal, Lodewick said Zoomin.TV’s team will be tasked with producing content that will “enrich the Chinese Gen Z’s perception of their culture, community, and legacy”.

Zoomin.TV said at the time that it would target some 1.5 billion Chinese viewers across the Tencent platforms with its daily Gen Z-focused video content, which was designed to give “ordinary and talented people a voice”.