Sky reported strong full-year results with revenue and EBITDA gains, half a million new customer additions over the period, and TV churn in the UK and Ireland at its lowest level for a decade. 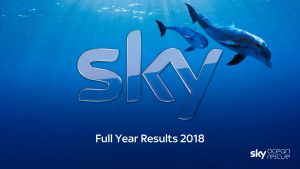 At the end of June Sky served more than 23 million households with 63 million Sky subscription products across seven markets. In the fourth quarter customer growth was up 39% year-on-year while product growth was up 81%.

Sky said that its Sky Q offering now has 3.6 million customers across each of its major markets, with the service helping to deliver lower churn, more incremental ARPU and higher customer satisfaction scores

Its 12-month rolling churn in the UK and 10.3%, its lowest in 10 years, which it attributed to better and broader content, products like Sky Q and Sky Fibre, more targeted discounting, and the launch of its VIP loyalty programme.

It also pledged to double the amount of Ultra High Definition content available on the service, with the launch of High Dynamic Range slated for 2019.

On the content front, Sky said it will grow its original output in the next 12 months, with plans to increase original drama investment by around 25%.

It also plans to invest around four times as much on content in Germany and Austria as it did a year ago, claiming this market is where its originals strategy is least developed.

Commenting on the results, Sky CEO Jeremy Darroch hailed an “exceptional year” for Sky. “Our strong performance reflects the execution of our strategy over an extended period of time, driving sustained growth in revenue, profits and shareholder returns.”

“Together with an increasingly agile and efficient organisation, we are able to deliver for shareholders whilst ensuring the customer experience is better than anywhere else.”

The results are likely to be Sky’s last annual figures as an independent company, as the bidding war between Comcast and 21st Century Fox nears its conclusion.

Comcast is currently in the lead after raising its cash offer for Sky last month to £26 billion, or £14.75 per share – a bid that Sky’s independent committee of the board recommended shareholders to accept.

Independent media and telecoms analyst Paolo Pescatore described Sky’s results as “stellar” and said that the company would be a “prized asset for both Comcast and Disney (via 21st Century Fox).”

“Whoever comes out on top will ensure that Sky has the resources to be an even more formidable player in the rapidly changing media landscape.”