The number of subscription video-on-demand subscribers in Asia Pacific (APAC) will climb from 141 million in 2017 to 351 million in 2023, according to Digital TV Research stats. 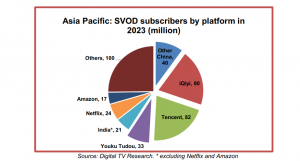 The research firm’s ‘Asia Pacific OTT TV & Video Forecasts’ report estimates that China will account for roughly two thirds of the region’s SVOD subscriber figure in 2023 with a total of 235 million subs.

By this date three Chinese companies are expected to top the APAC SVOD rankings in terms of subscriber numbers, forcing Netflix and Amazon Prime into fourth and fifth place respectively.

The research predicts that Tencent will lead with 82 million APAC subscribers in 2023, followed by iQiyi with 80 million, Youku Tudou with 33 million, Netflix with 24 million and Amazon with 17 million.

Despite this, Netflix is tipped to lead the market in 2023 in terms of SVOD revenues at US$3.12 billion. The top three Chinese platforms are expected to account for 54% of the region’s SVOD revenues.

“Asia Pacific SVOD revenues will triple from just under US$5 billion in 2017 to $15 billion in 2023,” according to the report “China’s share will remain at about half of the total.”

Ad-based sites are expected to be the main source of OTT revenues in 2023 at 54%, compared to 37% for SVOD sites. However, the SVOD market growing faster.