eMarketer: cord-cutting in US accelerating despite pay TV-OTT partnerships

Cord-cutting in the US will grow by a third this year compared with the figure for 2017, with 33 million consumers un-subscribing from their pay TV services, according to eMarketer. 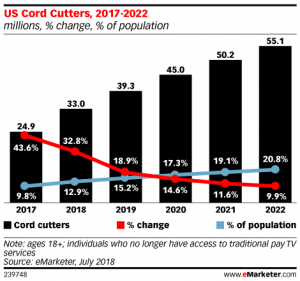 According to the research outfit, cord-cutting is continuing to outpace projections despite pay TV operators forging partnerships with OTT TV players such as Netflix.

The 32.8% growth rate in cord-cutting this year that eMarketer now expects compares with the 22% forecast in July 2017.

According to eMarketer, 186.7 million US adults will watch pay TV this year, down 3.8% on last year’s figure, compared with a dip of 3.4% recorded last year. Satellite providers will feel the biggest impact, followed by fixed-line providers.

Streaming platforms are meanwhile continuing to grow, with eMarketer increasing its future viewership estimates for SVOD and OTT platforms.

The research outfit expects Netflix to have 147.5 million US viewers this year, with Amazon expected to reach 88.7 million and Hulu to reach 55 million. HBO Now and Sling TV are expected to trail some way behind with 17.1 million and 6.8 million respectively. YouTube is expected to have 192 million viewers.

“These partnerships are still in the early stages, so we don’t foresee them having a significant impact reducing churn this year. With more pay TV and OTT partnerships expected in the future, combined with other strategies, providers could eventually slow—but not stop—the losses.”