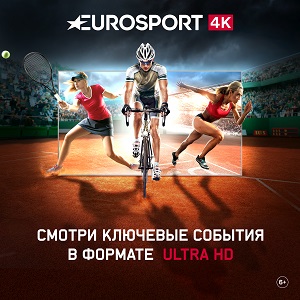 The channel, which is Tricolor’s first 24-hour general sports channel in the 4K UHD TV format, began broadcasting on the platform on Friday. The channel will also be the first 4K channel made available by Tricolor TV in Siberia.

The channel will air a number of top-tier sports events in UHD including biathlon and other winter sports, the World Athletics Championships and the 24-hour Le Mans motor race.

Tricolor TV had previously laid its claim to the be the first Russian pay TV operator to launch a package of 4K UHD TV channels in 2015, giving subscribers access to a mix of sports, entertainment, factual programming, movies and TV shows.

Grigory Lavrov, general director of Media Alliance, which distributes Eurosport in Russia, said that the launch of the first round-the-clock sports channel in the country in the 4K format confirmed the company’s leadership in innovation.

Tricolor TV content director Mikhail Goryachev said that the operator hoped that the addition of Eurosport 4K to its existing line-up of six UHD TV channels will attract additional subscribers to the platform, he said that Tricolor TV would place the channel in its One basic package until August 3 to give subscribers a chance to review it.